A 130-year-old world-famous Scottish lighthouse is to be switched off and sold as part of a money saving exercise. (Extract from a Scottish newspaper. 22 August 2012)

The Turnberry Lighthouse shines out across the Forth of Clyde and is well known to golf fans because of its location on the world famous Ailsa golf links.

The 19th century structure is to be sold by the Northern Lighthouse Board (NLB) to help cut costs. 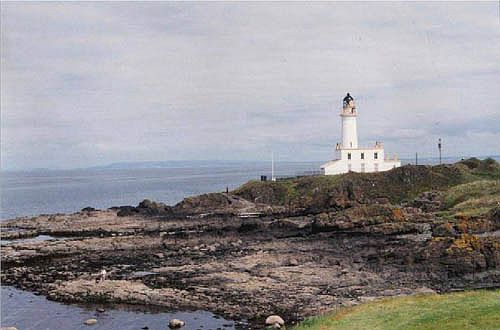 Turnberry lighthouse is well-known to golfers around the world. (And is now owned by American billionaire - Donald Trump. Ed - 3/8/15)

Heralded as “probably the most famous lighthouse in the world,” property experts believe Turnberry will be converted into holiday accommodation for wealthy golfers.

The majestic lighthouse sits on the mainland near Ailsa Craig island and was designed by David and Thomas Stephenson to warn passing vessels from Bristo Rock. It was built in the moat of the 13th century Turnberry castle.

Since 1878 it has flashed its white light every 15 seconds, helping ships to navigate up to 24 nautical miles away.

In an official report, the NLB found Turnberry Lighthouse to be of “limited value” to modern-day commercial shippers, the majority of whom passes west of the island, and “derives little benefit from Turnberry.”

The decision made by NLB, who intend to sell the tower in 2015, has been met by sadness by locals and lighthouse experts.

Ken Trethewey, founder of the Lighthouse Society of Great Britain and author of The Keepers, said the structure was a “fantastic icon” for Scotland.

He said: “I remember watching the Open when it was last at Turnberry and it occurred to me that the lighthouse is probably the most famous in the world, just because it appears on television screens and photographs all over the globe.

“I can’t think of another lighthouse that has more exposure. People talk about Bell Rock and the Eddystone, but in actual fact, Turnberry is the one that people all over the world see, it’s unbelievable. I didn’t know Turnberry was on a list of proposed closures, and my initial reaction is sadness because it’s a fantastic icon for lighthouses and Scotland.”

Archibald McFarlane, secretary of the Clyde Fishermen’s Association, said the lighthouse would attract a lot of attention on the open market. “There are all sorts of people that fall in love with the history of the buildings and they make a very unusual home. I’m sure Turnberry would make a very good home, although you’d need to be fairly fit to climb all the stairs,” he said.

Ian Duff, from Oban, who worked as a keeper at 13 Scottish lighthouses between 1976 and 1992, before automation rendered his post redundant, said Turnberry was a “plum station” to work at.

He said: “Keepers generally looked on it as a plum station,” he recalled. “You were close to a community and, of course, the golf course. You also got a lot of visitors compared to other lighthouses.

“Similar lighthouses have been turned into luxury hotels, and I would imagine that when Turnberry is sold off, it’ll go for a large sum of money because of where it’s situated. I remember when the Open was at Turnberry, people where trying to rent the keeper’s accommodation and were willing to pay very large sums of money just for the one week.”

Leisurecorp, the Dubai World investment company which owns the Turnberry resort, describes the lighthouse as “one of Turnberry’s most powerful charms.””

The lighthouse is just yards away from the green of “Bruce’s Castle”, the ninth hole at Turnberry’s Ailsa course, which has hosted the Open four times. It was last seen on TV screens across the world when veteran Tom Watson, 59, was beaten to the prize by fellow US professional Stewart Cink in 2009.

Lorna Hunter, information officer at the NLB, said: “Following consultation the board intends to discontinue the current major light when the station becomes due for refurbishment in 2015.

“Under the board’s governing legislation, they are only able to hold property for providing aids to marine navigation or supporting this work. Therefore the board may dispose of the site.”