Hello from Winnipeg, MB,
I thought I'd send a image of my QSL card which I designed for the weekend of August 18-19, 2007. A little got lost in the converting the image to JPG but you get the idea. It was an excellent day weather wise  and although I only was able to have QSO's with 4 lights, I also worked 2 special event stations and about 20 NAQP contest stations. They really filled the airwaves here. It was fun and I hope to have more success next year.
Have a Good day!
Tedd - VE4VID

The ninth International Lighthouse and Lightship Weekend (ILLW) on 18 & 19 August saw up to 40 activations of Australian lighthouses confirming that we've really embraced this event.

Organised by the Ayr Amateur Radio Group the ILLW and grew out of the 1999 Northern Scotland Lighthouse Award Weekend to become an international activity involving 52 countries.

Maritime navigation around Australia's coast and into its ports relied on lighthouses in the past and today provides many opportunities for participation.

In 2000 only the Cape Otway Lighthouse VK3OWL was activated in the State of Victoria with 12 in total that year around Australia, but this year it was 9 VK3 out of a total of 40 VK.

For its third year, Amateur Radio Victoria activated the Williamstown Lighthouse putting 402 contacts in its log including 21 other VK lighthouses in all states and two from New Zealand.

Mainstays of the operation were Terry Murphy VK3UP, Michele Grant VK3FEAT and Jim Linton VK3PC. They were joined by more than 30 others on the weekend.

Interest was shown by Foundation Licensees and those who have had their ham ticket a relatively short time and travelled to Williamstown in Melbourne's south-west.

All were encouraged to get on air to experience what ILLW and portable operation is all about.

This year Tim Hunt VK3IM had a string of CW contacts for VK3WI. There was a bit of activity on IRLP. Among the others who enjoyed the day were VK3ZGD Graeme Downie and VK3KG Peter Elton.

All operators had a script of information that provided a summary of the history of the Lighthouse and Time Ball Tower, and the details were welcomed by those who made contact with VK3WI.

When making contact with other lighthouses, information was shared about their lighthouse, working conditions and the activation.

Curious members of the public were proactively approached so their questions could be answered an explanation of ILLW given and the WIA's "Calling CQ…." brochure was handed out.

On both days the billy and BBQ was in operation adding to the real picnic feel of the event with many sitting around and socialising. The weather was at times cold, but that just provided nostalgic thoughts of how it must have been for the lighthouse keepers of yesteryear.

VK3WI was put on air over the weekend through two HF base stations, VHF and UHF. The main antenna was an inverted vee strung from the lighthouse providing an excellent radiator.

It put out an enormous signal, particularly on the 80m band after dark when the station took shelter inside the lighthouse where it operated until about midnight both days.

Apart from the weekend being a lot of good fun it has provided inspiration, particularly to John VK3ARK who decided on the spot that he would organise an ILLW activation by members of the Eastern and Mountain District Radio Club of a Gippsland lighthouse in 2008.

Amateur Radio Victoria will return to Williamstown next year. It thanks Parks Victoria for its permission and assistance to that enables it to be part of ILLW.

Finally, but not least, thank you to Kevin Mulcahy VK2CE who runs the official ILLW website dedicated to the memory of the ILLW Founder, Mike Dalrymple GM4SUC (sk). 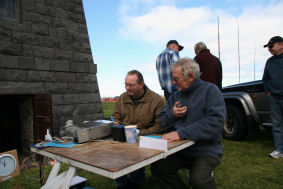