Reports from entrants in the 2022 ILLW event.

Thanks once again to all the entrants for joining in the fun of the Lighthouse Weekend and for making it another successful year. 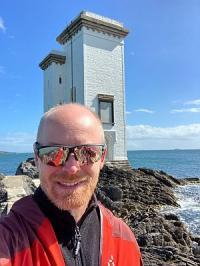 I‘ve activaed the lighthouse Port Ellen in 25‘th ILLW 2022. I‘m parking nearby the LH, so that the people who want visit the LH passed my station. To a few people i‘ve explain what i‘m doing there.

My RIG KX3 and vertical antenna 20m/40m (DX Commander). 11 QSO found the way in my log. Not many but ok for my holiday style activation.

I‘m very glad to activate some LH in my summer vacations. Where we hear us next year??

Here is is a report from Shoreham Lighthouse on the south coast of England. Our reference number is UK0023, and the Worthing & District Amateur Radio Club used the callsign GB8SL after a 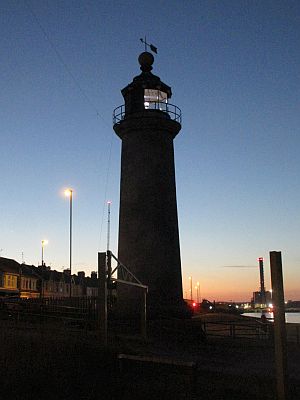 Following several solar storms and an empty 40 meter band when I listened at home on Friday lunchtime, I was worried that propagation would be terrible for the whole ILLW. I needn’t have worried. Conditions on 40 meters were the best that I have heard them during this event for years. Although 40 meters SSB is our band and mode of choice, we also had contacts on 80m, 20m, 17m, 15m and our very last QSO was our only one on 10m!

Another highlight was working every registered lighthouse in Northern Ireland.

We did hear VK5PAS (not a lighthouse) at moderate strength on 20 meters on Sunday morning, but we did not try calling him as we were unlikely to break through his pileup. Otherwise every station we worked and / or heard was inside Europe.

Finally, a couple of very minor grumbles. Please could I request that stations using a non- Special Event Station callsign mention occasionally that they are taking part in the ILLW. We very nearly missed working one lighthouse because the operator was registered under his personal callsign but never stated on-air that he was operating from a lighthouse. His calls sounded more like a contest station and I’m guessing he was simply using a call stored in his radio’s memory. If you’re going to do that, then please update it for the duration of the ILLW!

Secondly please avoid registering at the last minute if possible. I don’t have a working printer at home (yes I appreciate this is my problem). The last opportunity I had to print out the list of registered stations was on the Tuesday evening. It stood at 348 entries at that point whereas the final list contains 393… 45 more. We don’t have a great internet connection at GB8SL which meant we made quite heavy use of my printed list. It would have made our lives considerably easier, and reduced confusion, if more of those 45 lighthouses had registered during the preceding 51 weeks instead.

Anyway the weekend was so successful overall that I have registered GB8SL for ILLW 2023 already, and I have made a YouTube video that appears at https://www.youtube.com/watch?v=8rR6oaYsIf4

73 to you Kevin and to all lighthouse fans / ILLW participants everywhere. 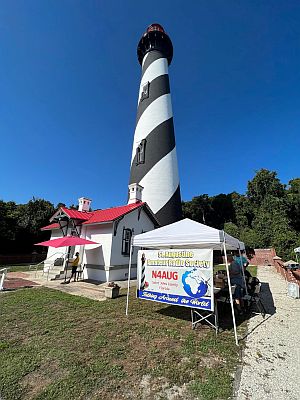 The St Augustine Lighthouse US0198 was activated for the ILLW as N4AUG.by the St Augustine Amateur Radio Society. Being the oldest city in the US (455 years old) this a particularly significant Lighthouse. This club (SAARS) has operated ILLW for 20 years. As always, numerous club members participated. The antenna is always hung directly from the lighthouse so that we are literally activating this lighthouse. Though now privately held in trust as a museum,the light is still in operation as an official aid to navigation with an official light keeper(Rick Cain). Highlights of the weekend included contacting stations in Alaska as well as the museum ship USS Savannah which is moored in Baltimore Harbor. 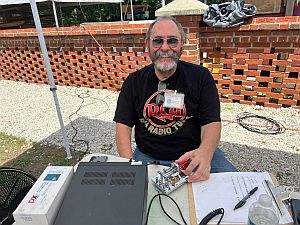 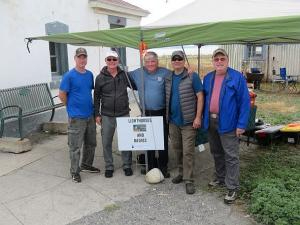 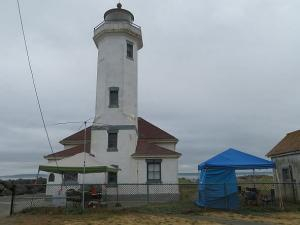 The ILLW was held for the 25th time this year. Reason for us to be one of this year's 393 registered stations for the 16th time in a row. A happy occasion!

In contrast to this message:

Friday, August 19, 2022: Showers and thunderstorms with some heavy rainfall are expected in Saxony.  Brrrrr!!! 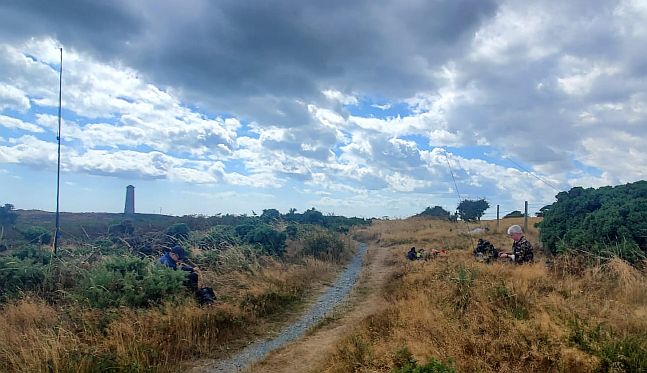 A range of HF half wave dipoles and vertical flower-pot style VHF/UHF as well as whip antenna were deployed on the day.

QSO's were made with a number of stations who were also activating Lighthouses and Lightships.

A small stove was also deployed to keep the team fueled with coffee.

The Club is already looking forward to next year! 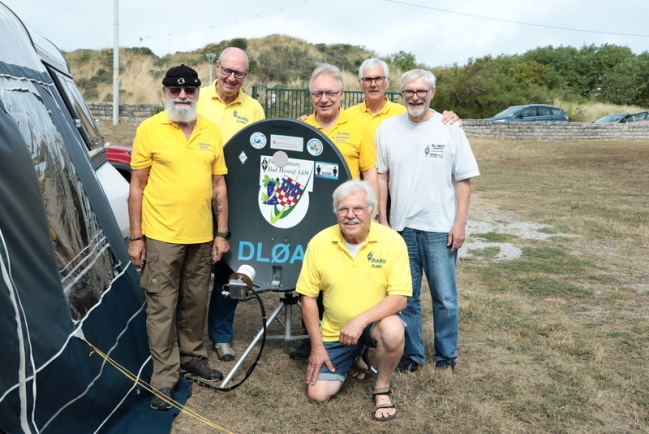 The TM0BSM team ceased operations from the Berck-sur-Mer lighthouse on the morning of August 22nd.

And further: "The acknowledgments of receipt will soon be sent via the DARC's QSL exchange," says Dietmar Worgull (DK5OPA), the team's QSL manager."

"We would like to thank all radio partners around the world, our local helpers and our supporters at home," said Hans E. Krüger (DJ8EI) and Stefan Scharfenstein (DJ5KX), the two leaders of the TM0BSM team 2022.
More infos qrz.com 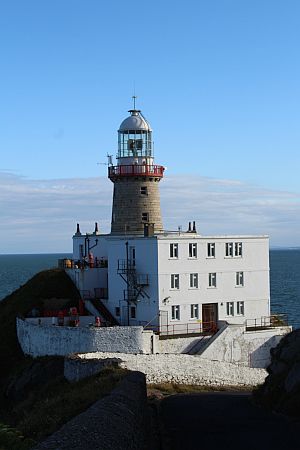 On the weekend of the 20th & 21st of August, the North Dublin Radio Club (EI0NDR) activated the Baily Lighthouse at Howth, Co Dublin. (IE-0025)

Overall, twelve members of the club took part in the event over the two days, and for the majority of the members who attended, it was their first ILLW event.

The club operated approximately 8-10 hours each day and made contact with 23 different lighthouses around Europe.

The club is proud of the fact that the vast majority of the contacts made were done using homebrew antennas built by the members of the club, including a magnetic loop made by Darwin (EI4KX), a dual 6 & 4 meter delta loop made by Chris (EI5HHB)  and an end fed half wave wire antenna built by Mick (EI6IKB).

The club set up its equipment in two cabins adjacent to the helipad on the lighthouse grounds.

The club members also used the ILLW event to field test their own equipment. 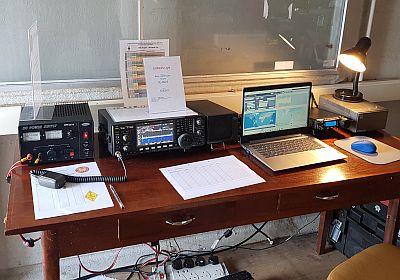 Annard (EI4IQB) set up for  FT8 on his Icom ic-705 and made multiple contacts, and Chris (EI5HHB) set up for 2 meters, 4 meters, 6 Meters and 70 centimeters, which culminated in a lot of calls for our log including some ARISS contacts into Europe.

The majority of the contacts were on SSB phone and CW  and were made by Tony (EI5EM), Darwin (EI4KX) Victor (EI5IYB) Mick(EI6IKB) and Clive (EI2HHB).

Dermot (EI4ESB), Tony (EI6K) and our newest licensee Howard (EI9INB) were also a huge help over the two days.

We are already looking forward to next year and making contact with even more lighthouses.

All the members involved had a wonderful two days at the Baily and we would like to thank both the staff on site and at the Commissioner for Irish Lights for the hospitality and their assistance in making the club's field day a memorable one.

From Rajesh in India as AT3VLH 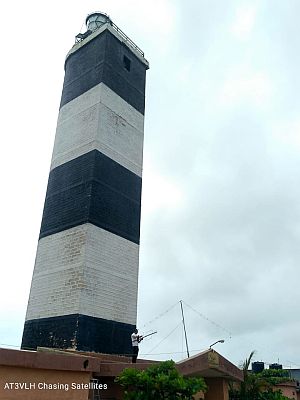 To celebrate 25th Anniversary of ILLW,

I carried out AT3VLH Light House activation from Veraval Gujarat India from 19th to 22nd August 2022. Was amazing learning experience for me and my daughter Sakshi VU3EXP. There was great learning experience to operate on SSB, Digital & Satellite modes. We just felt in Love with Light House. I attach herewith detail report (click here for report) of my AT3VLH light house activation along with photos of the event. (Click here for photos)

Thank you so much for all your hard work to promote LH activities across globe,  it was great opportunity to be engaged with Light House activation.

I also thanks our good friend Lion Ajoy VU2JHM for all his great support & guidance.

E: This email address is being protected from spambots. You need JavaScript enabled to view it.